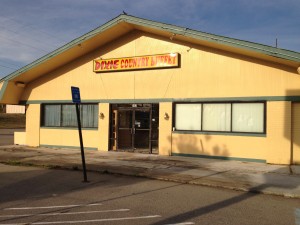 North Carolina-based Cook-Out has inked a deal to open in the former Dixie Country Buffet, adjacent to Burger King on South Park Street. The new Cook-Out will likely have both indoor and limited outdoor eating as well as a Drive-Thru.

If all goes well, demolition of the existing building could commence soon and the new Cook-Out could open by 2015. Cook-Out offers a variety of economically priced burgers and sandwiches as well as a TON of milkshake options.

Cook-Out entered Georgia last year with a location in Statesboro near Georgia Southern University. Other locations have since opened in Augusta(2), Athens, Pooler, Savannah, Milledgeville, Rome and Atlanta, on Moreland Avenue near Little 5 Points.

Cook-Out plans to open additional locations in Atlanta near Georgia Tech, Kennesaw near Kennesaw State University and in Winder. Industry sources say Cook-Out reportedly has plans to open 20-25 locations (chain-wide) annually over the next five years.

Cook-Out’s mission statement is “To serve customers the highest quality food in the least amount of time in a professional well run way, overall to be the best in the QSR business.”

Classy Cricket Hops Down the Street